We understand Authenticity to be “what lies between people”.

Our research has revealed that authentic leaders are trusted, they have integrity underpinned by lived values and they stand out because they challenge themselves and empower others to be the best they can be.

Authenticity at a glance

Harter (2002) defined authenticity to mean that a person’s thoughts and feelings are consistent with their actions. Bass & Steidlmeier (1999), Luthans & Avolio (2003) and May et al., (2003) have all indicated that “authentic leaders are guided by a set of values that are oriented toward doing what’s right and fair for all stakeholders” (Michie and Gooty 2003 p443).

Recent research asked over 332,000 bosses, peers and subordinates to identify which characteristics have the greatest impact on a leader’s success at any level (Zenger and Folkman 2014). ‘High integrity and honesty’ was rated the second most important. Research into emotional intelligence in executives supports this (Cooper and Sawaf 1997). In fact, “Integrity – acting openly, honestly and consistently – sets apart outstanding performers in jobs of every kind.” (Goleman 1998 p90).

'Trustworthiness' and 'fairness' figure prominently in the literature on building successful psychological contracts with and engaging staff, i.e. motivating employees to want to make extra efforts to achieve their organization’s goals. (Conway and Briner 2005, Purcell 2006, Saks 2006, Den Hartog and De Hoogh 2009). Palanski and Vogelgesang (2011) link leader integrity positively with employees’ creativity and willingness to take risks. The trustworthiness of its leaders is also important to an organisation’s long term stability (Dietz & Gillespie, 2009). James H. Quigley, Global CEO of Deloitte Touche Tohmatsu, emphasised the importance of trust in the professional success of an individual: 'Simply put, those who bend rules are not considered trustworthy, and without trust an individual’s value is severely diminished. Without trust and confidence, markets do not function, and value is destroyed.' (Quigley 2007 p9).

Our own research since 2009 has highlighted the importance of trust. More recently, we identified the fundamental qualities that leaders need in order to be trusted. The single most important driver of trust is openness, closely followed by effective communication coupled with integrity. Trust is also a powerful indicator of organisational health, with high levels of trust being linked to high levels of performance (Institute of Leadership & Management, 2014). High levels of trust lead to improved team work, communication, innovation and risk management. Indeed our 2010 showed that the ability to inspire trust was considered as important as being visionary. In 2013, we identified how much more aware leaders are of the need for ethical behaviour in all sectors, not just those associated with the 2008 financial crisis. We found a clearly stated need for increased transparency and also evidence that organisations with explicit and established statements of values reported higher levels of employee engagement (Institute of Leadership & Management, 2013).
Pfeffer has been critical of the quest for authenticity in leadership advocating a more inauthentic and Machiavellian style (Pfeffer, 2015). However, his views have garnered little support and many commentators (Gwyther, 2016) have posed the question 'who would you rather work for' a ruthless bully or someone you trust and empowers you?

Want to go further? Download our comprehensive report to discover more about Authenticity 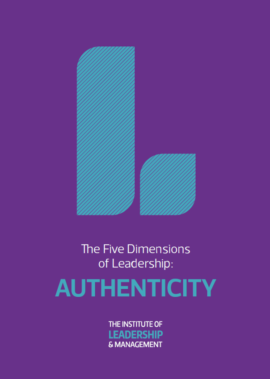 "To be authentic you must communicate to others what you think and what you feel without disguise or tactical cunning".
Charles Hampden-Turner

Ethics is a component of Authenticity. Within Ethics, we also cover key topics including Spotlight on History of Ethics, Spotlight on Ethical Leadership and Spotlight on Acting Morally.

Integrity is a component of Authenticity. Within Integrity, we also cover key topics including Spotlight on Personal Mission Statements, Spotlight Walking the Talk and Spotlight on Moral Courage and Office Politics.

Supporting is a component of Authenticity. Within Supporting, we also cover key topics including Spotlight on Health and Safety, Spotlight on Fun and Humour and Spotlight on Bullying and Harassment.