We understand Ownership to mean being responsible and accountable.

Our research has revealed that leaders who assume ownership keep on learning, they understand the importance of reputation and create a safe environment, they stick up for their staff and are important role models.

Ownership includes being decisive, solve problems, delegating, abstaining from blame, taking responsibility and regular objective reflection on events and their own actions.
Being decisive is a core leadership responsibility never more so than when problem solving is needed: 'Inaction or procrastination is not a prudent alternative as it mostly results in missed opportunities' (Yamoah, 2010, p.419 ).
A leader’s success is dependent upon appropriate and timely action. Torbett et al (2004) refer to the importance of ‘response-ability’.
Leaders do not do everything themselves. Delegation of tasks but not responsibility is crucial. As Gallo advises though 'don’t walk away from a task you’ve delegated. Stay involved but let your employee lead the way' (2012, p.1).
The damage done to the morale of employees when their leaders shirk responsibilities and deflect blame onto others should not be underestimated (Miller, 2008). When mistakes have been made by employees, taking a developmental, problem solving perspective rather than a judgmental one, can help individuals learn from their experience and improve their organisational performance (Tjosvold et al, 2005).
Good leaders tend to proactively seek honest feedback about their own performance (Furnham 2010). Indeed, a person’s ability to be self-aware and reflect systematically, continuously and objectively on events and their own role in them is considered by many as a significant factor in the likelihood of that person being effective in their work (Argyris, 1976; Kolb, 1984; Nesbit, 2012). Reflective leadership has been shown to improve organisational performance (Castelli, 2016). Leaders who reflect encourage a culture of learning in the organisation.
By contrast, leaders who do not care for colleagues; who avoid delegating and try to do everything themselves; who are controlling; keen on emphasising their status and who are indecisive, fail to deliver (Owen, 2014).
Showing ownership is about personal actions and applies to others as well as those in a formal leadership role. Senge (2006), in writing about ‘personal mastery’, links high levels of commitment and willingness to take initiative with a deep sense of responsibility. Such people become committed to a process of learning which feeds organisational learning, producing a ‘learning organisation’: 'an organization that is continually expanding its capacity to create its future' (Senge, 2006). These organisations will grow, develop and achieve excellence.
Leadership is not fixed and many individuals within an organisation can make a difference – both alone and together. Taking responsibility is also central to Coleman’s argument – leadership requires developing the habit of accountability for outcomes, including when working with others (2012).
The link between leadership, learning and ownership is reflected on by Doyle and Smith who suggest that: 'involving those with a stake in the situation – especially those at the sharp end – gives a chance for insights to emerge' (2001).
They note however, the responsibility of contributing to shared leadership can be seen as difficult because it involves the sharing of thoughts and feelings in a productive way which is sometimes culturally and temperamentally difficult for some leaders.
Moving beyond personal actions there are also alternative organisational structures that can create a deeper sense of ownership (read about Tiptree preserves on page 10). Whatever context we are in, as individuals and leaders we can reflect on our own preparedness to take ownership.

Want to go further? Download our comprehensive report to see the full picture on Ownership. 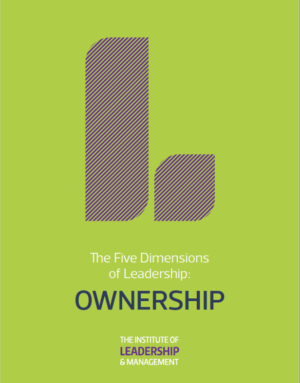 "We’ve got to know as much about our youngsters as Tesco knows about me because by doing that you can actually spot before they get to those difficulties where the difficulties are going to be.
We’ve got to keep children’s learning healthy by knowing very well about them through the data, through tracking it, through monitoring it and through evaluating it so we can identify a really good picture about their learning".

Empowering is a component of Ownership. Within Empowering, we also cover key topics including Spotlight on Delegation, Spotlight on Empowerment and Spotlight on Participative Leadership.

Learning is a component of Ownership. Within Learning, we also cover key topics including Spotlight on Growth Mindset, Spotlight on Personal Development Planning and Spotlight on Formal and Informal and Social Learning.